The Planes of Development - Maria Montessori 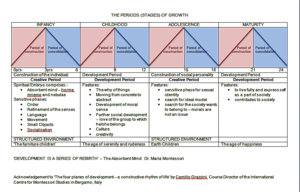 “The child’s development follows a path of successive stages of independence, and our knowledge of this must guide us in our behavior towards him.” — Maria Montessori

Dr. Montessori outlines four consecutive planes of development from birth to maturity; each plane spanning approximately six years. At each plane of development children and young people display intellectual powers, social orientations and creative potential unique to that stage. Each plane is characterized by the way children in that plane learn, building on the achievements of the plane before and preparing for the one to follow. The timing and nature of the transition between planes vary from individual to individual.

From eighteen to twenty-four, in the fourth plane of development, young adults develop specialist knowledge and skills, preparing them to take their place in the world and establish social and economic independence.

For each plane of development there is a specific Montessori learning environment. Montessori environments for each plane maintain distinctive Montessori characteristics including freedom of choice and movement and an emphasis on independent exploration and self-directed learning. At the same time the design of each environment is customized to the specific needs, interests and potential of each developmental stage.

Within each plane of development there are periods during which children and young people display intense interest in a particular activity or aspect of the environment. These periods were called by Dr. Montessori sensitive periods for learning, especially in the context of early childhood. The sensitive period for language, for example, is active during the first plane of development from birth to six years. This sensitive period provides a window of opportunity that enables children to learn language with ease and enjoyment. If, for any reason, a child does not learn to speak in this time, the sensitive period disappears and the learning of language requires much greater effort. The particular learning sensitivities and needs of children at each stage of development are reflected in the design of the Montessori environment and in the resources and activities prepared for that stage of development.